25 of the most beautiful places around the world 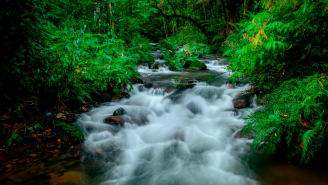 (CNN) — The world’s a spectacular place, full of hidden and overt beauty in every corner. But beauty’s also subjective. It’d be impossible to get a unanimous decision on the most beautiful places around the world, but we believe this list is a good start to plan your travels.

We’ve rounded up the best of the best.

Dense, lush and otherworldly, Bwindi Impenetrable Forest is one of the last redoubts of the mountain gorilla. Over 400 call this UNESCO-protected national park home, with the chance for visitors to trek to and meet habituated groups. Its biodiversity extends far beyond its most famous inhabitants, however; 348 bird species and 220 butterfly species can be found within its 331-square-kilometer expanse.

Thanks to its relative inaccessibility, Samburu, in the heart of Kenya, is a haven for some of Africa’s most beguiling wildlife. The grassland and acacia-dotted landscapes of its national reserve are home to the endangered reticulated giraffe and Grevy’s zebra, as well as the pioneering Elephant Watch Camp, run by conservationist Saba Douglas-Hamilton.

At 4,167 meters, Mount Toubkal lays claim to the title of “the roof of North Africa.” The path to its summit zigzags across empty valleys, past holy shrines and up steep snowfields before emerging onto a ridge that falls away to give climbers unrivaled views across the Atlas Mountains. It’s a peaceful world away from the buzz of nearby Marrakech.

China’s first UNESCO World Heritage site, Zhangjiajie National Forest Park in Hunan Province is known for its towering sandstone pillars. Best explored on foot, its back trails make for an easy way to escape the crowds and find the best views. As the mists descend, it’s easy to see why this area has long been an inspiration for traditional Chinese paintings.

Its enduring popularity has made Ha Long Bay one of the hottest natural attractions in Southeast Asia. But that doesn’t stop it from being the most beautiful place in Vietnam. With 1,969 islets of hulking limestone and deep, green waters that are home to myriad floating villages, this is a place where time slows to a standstill. Sail on a junk boat or pick up a kayak, and get lost in the quieter reaches of this vast and fascinating corner of the South China Sea.

At the northerly tip of the Philippine island of Palawan, El Nido is the ideal base for a diving adventure. Bacuit Bay, to the west, is the best place to start, with lagoons and shallow bays playing home to an unbelievable array of marine life. Its beaches aren’t too shabby either: Nacpan Beach is a true slice of paradise; azure waters and pristine white sand satisfy even the most discerning of beach bums, while the peaceful town of Sibaltan in the east offers tropical relaxation in a setting that feels impossible to beat.

With its otherworldly landscapes and close connections to native Maori culture, Rotorua is New Zealand’s crowning glory. Hot Water Beach, on the shores of Lake Tarawara, is the ideal place for a dip in the geothermal-heated waters. Hike through 60-meter-high California Redwoods in Whakarewarewa Forest and catch sight of the region’s lakes, the kind of view that feels as if it can never be matched when you’re taking it all in.

Formerly known as the Olgas, Kata Tjuta, in the heart of Australia’s Red Centre, is one of the most sacred sites in Aboriginal culture. The Anangu people, who have lived here for over 22,000 years, manage the land with Australian park authorities. The site’s stone domes are best explored as the light changes at sunrise and sunset — dedicated tours led by Anangu people explain the significance of the “Many Heads” and their place in their traditional myths, known as Dreamtime tales.

The sand of its 1,200 islands is as white as it gets, the water a deep blue that puts all other seas in the shade. The Indian Ocean nation of the Maldives has developed into the world’s premier tropical hotspot for a reason. Best of all, there’s plenty of beach to go around, with over 100 private resorts and welcoming, affordable guesthouses around the Male and Ari atolls. Sip on a cocktail, take a swim or dive to some of the finest coral reefs on the planet, where schools of fish sweep and sharks hide in the depths.

While the ancient city of Petra is simply a famous archaeological site to most of the world, for university professor Sami Alhasanat, it’s home

The perfectly preserved ancient Nabatean city of Petra is renowned for the narrow passage of the Siq which leads to the famous Treasury, or Al Khazna. Explore its temples, tombs and alleyways on camel back or strap on your walking boots and hike around its walkways for a truly mesmerizing experience.

With the clearest skies on the planet, Chile’s Atacama Desert is the ultimate destination for stargazing. It’s earth’s driest desert, meaning cloud cover is nonexistent, so even without a telescope, you’ll get views of the night sky that’ll take your breath away. The landscape is stunning, too, with deep craters and smoldering volcanoes visible on the horizon as the sun goes down.

Shrouded in near permanent cloud, the Monteverde Cloud Forest Reserve in Costa Rica is the most magical corner of this tiny, biodiverse country. Its muggy, damp environment is a haven for a truly astonishing array of birds, big cats and insects. Keep a keen eye out for the resplendent quetzal, one of Earth’s most beautiful birds. The winding trails through lush undergrowth make it easy to explore, too.

Accessible only by foot, Colombia’s Ciudad Perdida (Lost City) is one of the most fascinating ancient ruins on Earth. Believed to pre-date Peru’s Machu Picchu by as much as 650 years, the city’s terraces and statues attract far fewer visitors, making it much less hectic to explore. The hike to Ciudad Perdida itself is one of the greatest hikes in the world, a multi-day epic adventure through lush rainforest that is unforgettable as it is challenging.

Dominica is known as “nature island” for a reason. This tiny Caribbean state, focused on hot springs and rainforest treks rather than flopping on the beach, is nothing like its neighboring islands. Boiling Lake, in the Morne Trois Pitons National Park, is accessible via steep, mountainous paths, an ethereal body of water that is well worth the hike. For divers, Champagne Reef, with its explosions of colorful plants and fish, is a true paradise.

In the middle of the Arctic Ocean, between the North Pole and mainland Norway, the Svalbard Islands are the perfect destination for polar exploration. The thousands of polar bears make Svalbard one of the best places in the world to see these increasingly elusive creatures up close, while its dark wintry skies are regularly cloaked in the Northern Lights. Ride a snowmobile or take a husky ride across the monochrome snowscape.

The glistening blue water. The soaring backdrop of the Julian Alps. The famous church perched on an island at its center. It’s no surprise that Lake Bled has developed into one of the hottest destinations in Europe in recent years. That means big crowds in summer, but don’t be put off. Ripe for hiking and swimming adventures, this is a corner of Slovenia that demands to be explored.

Turkey’s Mediterranean coast gets all the attention when it comes to getting some much-needed rest. But Cappadocia, deep within the Anatolian plains at the country’s center, is the country’s greatest gem. The Fairy Chimneys near Gerome are the area’s most enduring sight, with ancient churches and monasteries carved into the bizarre geological formations. Its underground cities are also essential stop-offs.

Perched on Italy’s gorgeous Amalfi Coast, Positano is one of the most beautiful villages in Europe. Known for its killer boutiques and waterside restaurants, not to mention the Byzantine Church of Maria Assunta, it makes for the perfect summer getaway. Make sure to appreciate its full form by taking a boat out from the pebble beach for excellent sunset views.

Dramatics mountains, moody weather and ancient lakes have all helped make the UNESCO-protected Lake District an inspiration for artists, dreamers and wanderers. Wordsworth and Coleridge’s poetry helped turn this stunning corner of England into a tourist hotspot, while the hand-drawn guidebooks and maps of rambler Alfred Wainwright have made it a Mecca for walkers and those looking to escape the bustle of the city.

Croatia’s status as the ultimate European outdoor escape has long been assured. And in Plitvice Lakes National Park, which has enjoyed protected status since 1949, lies one of the most arresting sights in the world: A series of 16 lakes connected via waterfalls that are constantly changing the formation of the tufa rocks over which they flow. A vast network of paths and boardwalks around the lakes make it easy to explore, with lush woodland and beguiling wildlife at every turn.

With over 2,000 miles of coastline, almost 10,000 lakes and acres of soaring mountains, Vancouver Island is like Canada in miniature. Its surfing is among the best in the world, but take a boat out in the summer for possible orca sightings. Land lovers have plenty to appreciate about the back trails criss-crossing the island, encouraging exploration by bike or on foot. Head toward the forest on the trail of Roosevelt elk and grizzly bears for more thrills.

Home to North America’s highest peak, Denali National Park is one of the most tranquil places on Earth. Its six million acres of wild space make for the perfect escape, whether on a mountaineering adventure or a bus ride along the Denali Park Road. In September and October, look out for moose engaged in the annual “rut” — males battling for dominance, often in fights to the death. Grizzly bears can be seen throughout the year, too. Come in winter for a chance to catch sight of the Northern Lights.

No river meander captures the imagination as much as Horseshoe Bend. Here, the Colorado river turns back on itself having spent thousands of years carving a route through the desert. Close to the entrance to Grand Canyon National Park, it’s within easy walking distance of the nearest road, making it a breeze to grab a quick snap from the lookout above the outer edge of the bend.

Renowned for its rich fossil beds, Badlands, named by the native Lakota tribe for its arid and extreme terrain, is unlike anywhere else in the United States. The short Door Trail affords superb views of the surreal rocky peaks that cover the landscape. It’s possible to camp here, watching the sun rise and color the rocks in brilliant hues.

Monument Valley is the Wild West of the imagination. Its bright red mesas and buttes, standing high above the desert, are the stuff of legend. Ideal for a road trip, iconic Route 163 offers some of the best views of this protected land. It’s possible to get up close on horseback tours and live out those western movie dreams.