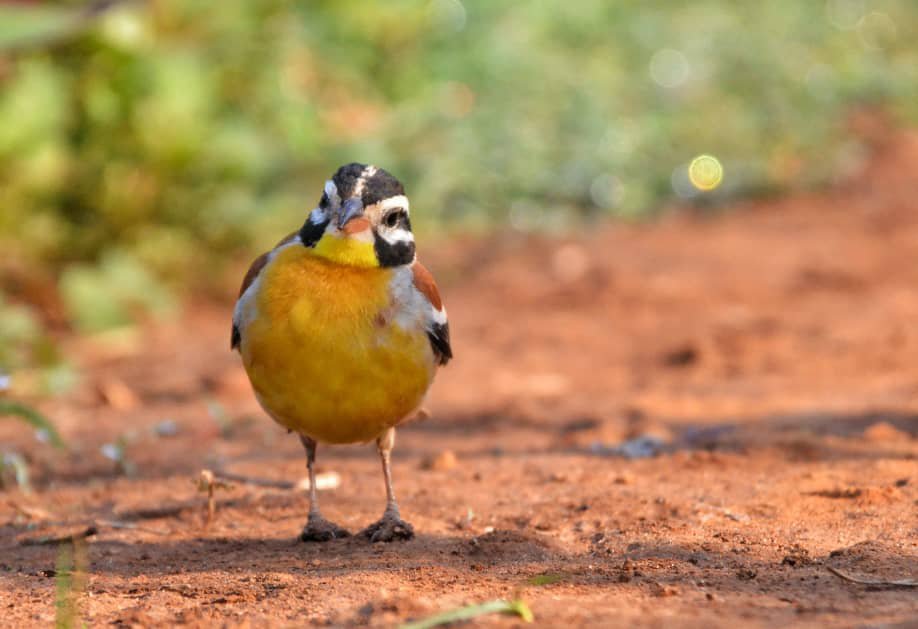 Come to this part of Africa, and you are likely to see this most beautiful of birds: The African Golden-breasted Bunting. It’s a breeding resident of Sub-Saharan Africa, and this curious one, walking with a slight limp, was photographed today in my neighbourhood. Here are ten (10) facts about these beauties.

1. Golden-breasted buntings don’t flock. They feed alone or in pairs.

2. They forage/feed on the ground, but fly up into trees when flushed or singing.

3. They are monogamous, but only seasonally. A pair works together to raise their young, but does not necessarily choose the same partner the next year.

4. They are solitary nesters, building an untidy cup of a nest, typically placed on a horizontal fork of a bush or tree.

5. Their egg-laying season is from September to April, peaking from October to December to coincide with the rains and the abundance of food.

6. They are territorial, the males rising high on tree brunches to sing in proclamation of their territories.

7. Males defend their territories by chasing away intruders, and breeding pairs work together to drive away threats.

8. Speaking of predators, their nestlings (chicks in nest) have been recorded as prey of the Common fiscal.

9. They are hosts for both the Diderick cuckoo and Jacobin cuckoo a.k.a the Black-and-white Cuckoo. The latter are well known brood parasites.

10. *And this is a Critical fact:* They are not threatened in the wild, except by human beings who regularly capture them illegally for the cage bird trade.