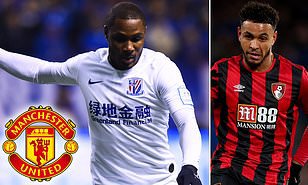 Manchester United have turned their attention to Odion Ighalo in their increasingly frantic search for a striker after Bournemouth wanted £40million for Josh King.

United conceded defeat in their bid to land Bournemouth‘s King after their offer of around £20m on Thursday night was quickly rebuffed and described as ‘a joke’ by senior Bournemouth officials.