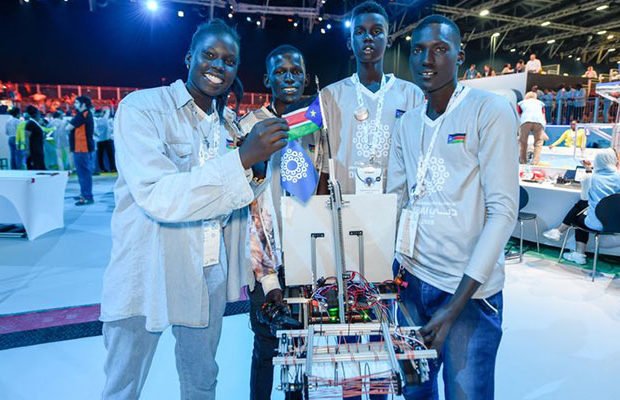 A team of South Sudanese teenagers was recently at FIRST Global Challenge, a robotics and AI competition hosted by Dubai Future Foundation under the theme ‘Ocean Opportunities’ in Dubai.

They were involved in the annual international robotics and artificial intelligence competition being held for the first time in Dubai.

In the event the team built a robot that can clean water bodies of plastics and other pollutants that made their way into the water body due to human activity every year, killing marine life affecting global populations.

The team mentor Richard Ring, said that the robot can be used to clean the Nile of plastic pollution.

Adau, one of the team members, said that innovative technology brings people together and she also appeals to the government to fund innovative ideas across the county.

The team, South Sudan Robotic was established in Feb 2017 by Team Manager Kuc Mayur Kuc and Mentor Richard Ring Kuach, with an enthusiasm to move and urge South Sudan youth to embrace and study Science, Technology, Engineering and Mathematics (STEM), and enable them to develop their talent and innovation to think in solving real-world problems in the areas of agriculture, energy and more.

According to the Team manager, the team has much desire for the future of the new nation to be showed in the progression of science and innovation as a tool for solving their critical problems, such as conflicts, food insecurity, water, and healthcare, among others.