A group of locals visiting the Kruger National Park have been fined R3 000 for contravening SANParks rules.

The people were at a lion sighting. He instructed them to get into their vehicle and a fine of R3000 was later imposed,” says Kruger National Park spokesperson Ike Phaahla. The fine was issued on Thursday, 9 January.

SANParks rules clearly state visitors must remain in their vehicles unless in a designated area. “SANParks has a zero tolerance stance against lawlessness,” says Phaahla.

“These are wild and not domesticated animals. Our rules and guidelines clearly state what to do when at sightings, and those who get out of their cars in undesignated areas are lawbreakers.” 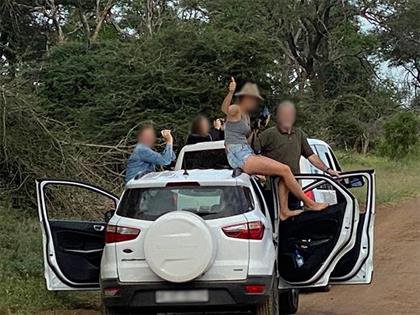 General rules when driving in the Kruger National Park:

– Driving a vehicle in a manner that constitutes a nuisance, disturbance, inconvenience or danger to any other person is not allowed.

– Driving or operating any vehicle in a reckless or negligent manner or in a deliberate disregard for the safety of a person, animal or property is not allowed.

– Behaving in an offensive, improper, indecent or disorderly manner including the playing of any radio, compact disc player, music system, musical system or instrument, or in any

way cause of any noise in any manner likely to disturb any species or specimen or other person is strictly prohibited.

– Stick to the speed limit! All general rules of the road apply within the Kruger National Park. The speed limit is 50 km/h on tar roads and 40 km/h on gravel roads.

– Visitors must remain in their vehicles unless in a designated area.

– No part of a person’s body may protrude from a window or sunroof or any other part of the vehicle. Vehicle doors should be closed at all times.

– You must be inside the camp or out of the gate before these times. No travelling before or after these times are allowed. Gate times must be strictly adhered to and late comers may be subject to a fine.

– You are not allowed to drive “off-road” or on roads with a “no entry” sign.

– The feeding or disturbing of animals is a serious offence. Remember, animals see litter as food!

– Vehicles of a carrying capacity exceeding 4 000kg, buses or any vehicles with more than 25 seats, are restricted to the tar roads.