It’s possible’: the race to approve a Covid vaccine by Christmas | World news 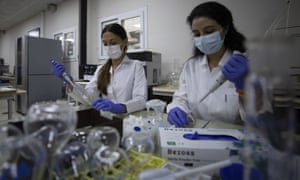 The race for a Covid vaccine is reaching a crucial stage, with the glimmer of a possibility that one of the leading contenders will be approved by Christmas.
In an interview with the Guardian, Kate Bingham, who heads the UK’s vaccine taskforce, said the UK was in “a very good place”.
But there are still hurdles to clear in the coming weeks.
The Guardian’s health editor, Sarah Boseley, explains the challenges ahead.

Within weeks, the first results to show whether one of the vaccines actually works will emerge. With a vaccine hailed as the world’s best hope of halting the deaths and the social and economic destruction wreaked by the Covid pandemic, the world is holding its breath.
It could be Oxford University, partnered with drug company AstraZeneca. It could be Moderna in the US. Or it could be Pfizer and the German company BioNTech.
All three have either recruited the last of the tens of thousands of volunteers they need for the critical final trials or will shortly do so.

And sometime in November or December, their independent monitoring boards will “unblind” their secret data to find out whether fewer people given the experimental vaccines are getting Covid-19.
The excitement is palpable. Bingham understands that.
“I can just see that it’s such an incredibly sensitive topic, that everyone is so desperate to be out of lockdown and get back to normal that everyone grabs at straws,” she said.
“I think my key message is we’re in a very good place. The UK is well set up, we’ve got a very attractive portfolio. We are absolutely well-planned and well-organised in terms of having the right vaccines and knowing when they’re arriving.”
The UK has bought six of the hundreds of vaccines under development. It has two of the three companies heading down the final furlong – AstraZeneca’s and Pfizer’s. Bingham says she thinks there is a chance of a vaccine before Christmas.
“They have to have enough cases to show vaccine efficacy and the regulator has to approve it. If all of that happens, then it’s possible that we could have a vaccine this side of Christmas,” she said.
“But, you know, I’ve called it a slim chance and I think it is a slim chance. I think we’ve got a better chance of generating that data early next year, but it’s not to say it’s impossible.”
It all turns on the …

In these final trials, recruiting up to 50,000 people, half get the experimental vaccine and half get something else. The trial is blinded. Nobody knows who has had what.
The codes for the vaccine allocation are held on secret computer files until enough people taking part in the trials have become infected with the coronavirus.
Then independent experts will look to see which drug they had.
The hope will be that most, if not all, of the people with Covid-19 will not have had the coronavirus vaccine.
Although volunteers are told how to reduce their own risk and may live in areas with low infection rates, this interim analysis could come quite quickly.
This is because the three companies have said they will start looking at the data when the infection sample sizes are still quite small.
Moderna has stated it will take a first look when it has 53 cases of coronavirus infection among participants in the trial, and again at 106. AstraZeneca has said it will look when there are 75.
Pfizer is waiting for only 32 and will look again at 62, 92 and 120 infections. They have largely been expected to declare first. Originally they planned to look in September.
CEO Albert Bourla was ambitious to have a vaccine by October – exciting Donald Trump among others, who thought it could be ready before the US presidential election.
But the timescale has slipped. On Tuesday, Pfizer said it hasn’t looked yet – which probably means there have not been enough infections.
And there is now a further delay because the US regulator, the Food and Drug Administration, has upped the safety stakes in the wake of the pausing of the Oxford University/AstraZeneca trial in which two people separately fell ill. The FDA has said it will not consider giving emergency approval to any vaccine unless there is safety data in at least half the participants for two months after the last dose is given. That means Pfizer could not submit before the end of November.

A one-shot wonder? Unfortunately not

Expectations of what the first vaccine will do are probably way too high. It will not end the pandemic. But there may well be something that crosses the line imposed by the regulatory bodies.
To be approved, it needs to be at least 50% effective. And it must be safe. Everybody agrees that cutting corners for speed could lead to disaster.
Dr Nick Jackson, from CEPI, the coalition on epidemic preparedness, which is supporting global vaccine development and has nine vaccines in its portfolio so far, says even when we have vaccines in use, safety will still have to be monitored. He cites Maurice Hilleman, the famous microbiologist who was involved in developing 40 vaccines. “Hilleman said many years ago, he only breathes a sigh of relief when the third billionth dose has been given. So the continuous monitoring for safety after these initial licenses is also going to be absolutely paramount,” he said.
CEPI has slightly different criteria for frontrunners. Along with speed, scale of manufacturing and access are vital too, so that all countries can get what they need to vaccinate those most at risk, said Jackson, who is head of programmes and innovative technology in CEPI’s vaccine R&D team.
“I think today, arguably AstraZeneca, Pfizer and Novavax are frontrunners, but we do recognise that there are others close behind. And we mustn’t forget that China also has some significant efforts. Sinovac is a very good example of a company with a vaccine that hits some criteria and is not far behind those frontrunners.”
Novavax, which is another of the six in Bingham’s UK portfolio and is now in phase three UK trials, has been “very, very active from a manufacturing perspective, not only in the United States, but also in other places around the world such as India, South Korea, in Prague and in Japan”.
“So they should be in a position in 2021 to provide potentially up to 2bn doses. That’s a really significant contribution towards public health,” said Jackson. AstraZeneca is working to produce up to 3bn doses around the world. Both companies have done a deal, for instance, with the Serum Institute of India, which can manufacture at scale for developing countries.
The commercial risks involved in starting to manufacture billions of doses of a vaccine which may turn out to be dud are obvious. But in this crisis, there is no room for that sort of caution.
Jackson says the global involvement has been phenomenal.
“I still am amazed at the number myself – 184 economies signed up to purchase or are eligible for vaccines from Covax, which is only comparable, I think, to the Paris climate agreement in terms of economic powers signing up for a particular initiative,” he said.
At the beginning of the year, they looked carefully at all the possible ways vaccine development could be speeded up, he said.
“We predicted it would be 12 to 18 months for vaccines to be available, and we do view that target as still being valid in the first half of 2021,” he said. That’s when they expect emergency licences to be in place and volumes of vaccine to be released that will allow the desperately needed immunisation campaigns to begin around the world.